Using a Remote ImageFactory with CloudForms

In Part 2 of Hands on with ManageIQ EVM I explored how ManageIQ and CloudForms could potentially be integrated in the future. One of the suggestions I had for the future was to allow imagefactory to run within the cloud resource provider (vsphere, RHEV, openstack, etc). This would simplify the architecture and require less infrastructure to host Cloud Engine on physical hardware. Requiring less infrastructure is important for a number of scenarios beyond just the workflow I explained in the earlier post. One scenario in particular is when one would want to provide demonstration environments of CloudForms to a large group of people – for example while training students on CloudForms.

The diagram below illustrates the decoupling of imagefactory from conductor. Keep in mind, this is using CloudForms 1.1 on Red Hat Enterprise Linux 6.3. 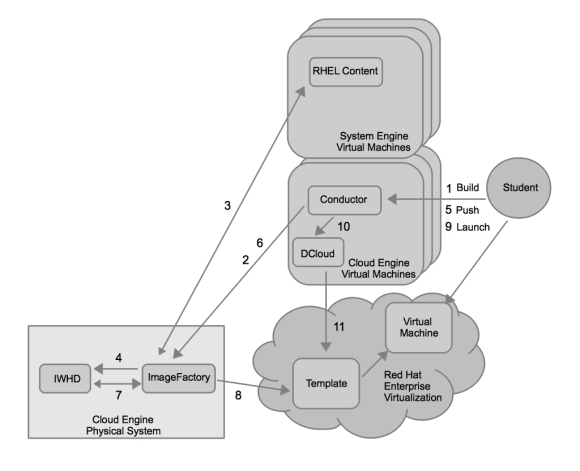 Using a remote imagefactory with CloudForms

1. The student executes a build action in their Cloud Engine. Each student has his/her own Cloud Engine and it is built on a virtual machine.

2. Conductor communicates with imagefactory on the physical cloud engine and instructs it to build the image. There is a single physical host acting as a shared imagefactory for every virtual machine hosting Cloud Engine for the students.

3. Imagefactory builds the image based on the content from virtual machines hosting CloudForms Cloud Engine.

4. Imagefactory stores the built images in the image warehouse (IWHD).

5. When the student wants to push that image to the provider, in this case RHEV they execute the action in Cloud Engine conductor.

6. Conductor communicates with imagefactory on the physical cloud engine and instructs it to push the image to the RHEV provider.

8. pushes it to the provider.

9.  The student launches an application blueprint which contains the image.

10. Conductor communicates with deltacloud (dcloud) requesting that it launch the image on the provider.

11. Deltacloud (dcloud) communicates with the provider requesting that a virtual machine be created based on the template.

Here are the steps you can follow to enable a single virtual machine hosting cloud engine to build images using a physical system’s imagefactory. These steps can be repeated and automated to stand up a large amount of virtual cloud engines that use a single imagefactory on a physical host. I don’t see any reason why you couldn’t use the RHEL host that acts as a hypervisor for RHEV or the RHEL host that acts as the export storage domain host. In fact, that might speed up performance. Anyway, here are the details.

3. On the virtual-cloud-engine configure RHEV as a provider.

9. After this is done, restart all the aeolus-services on both physical-cloud-engine and virtual-cloud-engine to make sure they are using the right configurations.

Once this is complete, you should be able to build images on the remote imagefactory instance.

It should be noted that running a single imagefactory to support multiple Cloud Engine’s is not officially supported, and is probably not tested. In my experience, however, it seems to work. I hope to have time to post something with more details on the performance of utilizing a single imagefactory between multiple cloud engine’s performing concurrent build and push operations in the future.

2 thoughts on “Using a Remote ImageFactory with CloudForms”